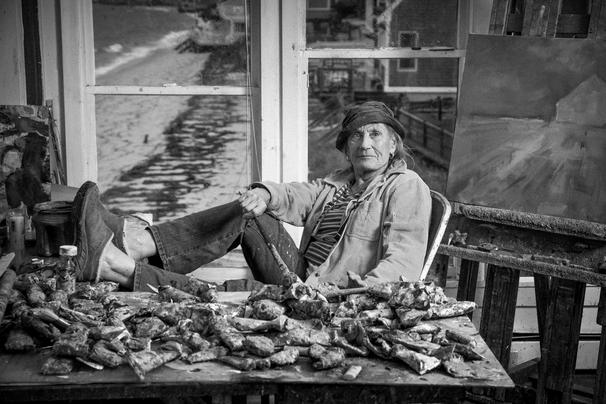 For over 50 years, Anne Packard (b. 1933) has continued to paint daily in her home studio in Provincetown, Massachusetts. She is the recipient of several awards and has been featured in film, television, books and press.

As a child, her family traveled from Hyde Park, New York to Provincetown, Massachusetts to enjoy the summer months.

Both her grandmother, Zella, and grandfather, Max Bohm (Gold Medalist of the Paris Salon in 1898 for his painting, “En Mer”) were artists. Max is credited for his leadership in the establishment of Provincetown as a successful artist’s colony. This artistic lineage is, in part, how Provincetown became so deeply rooted within her.

Though she longed to become an artist, her parents dissuaded her from pursuing what was considered a “bohemian” lifestyle. They influenced her decision to attend Bard College, marry and raise 5 children in Princeton, New Jersey.

The family spent summers at Sandy Neck in Barnstable, Massachusetts. The months spent on Cape Cod renewed her passion for art. The beauty and the natural light moved her, invoking a sense of nostalgia and reverence of nature’s ever-changing atmospheres.

She used driftwood and weathered shingles as her canvasses and turned the kitchen table into her studio. Her paintings hung on the fence along her family home. This dedication would eventually lead to owning her own gallery and establish her as one of Cape Cod’s most sought-after artists.

Packard moved to Provincetown year-round in 1977 with her youngest son. As she’d done years earlier in Sandy Neck, she hung her paintings along her fence for passersby's to purchase. This time, however, her passions were untethered and she was free to be a full-time artist and would forever be her livelihood. She studied with and was mentored by the late Philip Malicoat. Afterwards, Packard honed her mastery blending of colors to create depth to various atmospheres, horizons, and nature’s temperaments.

In 1986, Packard bought the Christian Science Church on Commercial Street and renovated it into The Packard Gallery, a place that has become a destination for people to view her paintings. Her daughters, Cynthia and Leslie, also show their art in the gallery.

Packard’s paintings span from her time living on the Outer Cape and her travels to Greece, Ireland, Italy, and Mexico.